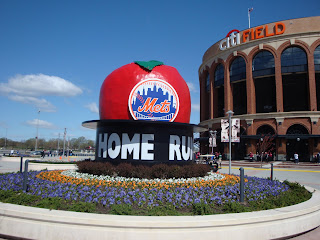 It looks good there, outside the stadium. A lot better than sticking it in what's essentially Citi Field's public back room or basement where it really couldn't be seen.

That said, coming off the train for the first time this season, I almost walked right past it without noticing it. I was making a b-line to the ticket window so I could get an inexpensive ticket for today's game and then to head into the museum for the first time. And then my focus was drawn to the guy selling programs in the walkway between the steps from the train/subway and the entrance to the ballpark. I almost walked right past it. I think my exact words to myself were "whoa, the apple is here".

Now, one other observation, and not meant to pick on its current location, or anything, but if you move the apple just a few feet (maybe less than 100 feet) towards the third base entrance, it would actually be in the spot which it occupied when it was actually alive at Shea Stadium. Think about the symbolism if logistics had allowed for that.


Leave a comment or drop me a line at DyHrdMET [at] gmail [dot] com.
Become a fan of RememberingShea on Facebook.
Become a Networked Blog
Email ThisBlogThis!Share to TwitterShare to FacebookShare to Pinterest
Posted by DyHrdMET at 8:53 PM