For 6 Months There Is Baseball

Six months when there is no baseball can either seem really quick, or really long. Those 6 months include a full month of post-season. Someone else's baseball. Those 6 months also include about 5 weeks of exhibition games before the next 6 months start and maybe 2 weeks of Spring Training practice reports before that. So it's not as long as it seems. 6 months when there is no baseball is really 3 1/2 months plus some baseball that doesn't really count for us.

Six months when there is baseball really is better. From what I remember, it's more fun when your team wins and you can count on them. But social media makes it fun too. Or at least tolerable. Certainly enough to keep me from jumping off the Shea Bridge.

I'll see you all tomorrow at the ballpark to say 'goodbye'. I like doing that more than I like going to Opening Day to say 'hello'. And then I'll see you in St. Lucie.


Leave a comment or drop me a line at DyHrdMET [at] gmail [dot] com. Your comments will fall into a moderation queue.
"Like" RememberingShea on Facebook (the function formerly known as "Becoming a Fan").
Become a Networked Blog
Email ThisBlogThis!Share to TwitterShare to FacebookShare to Pinterest
Posted by DyHrdMET at 9:02 PM
For 6 Months There Is Baseball
2014-09-27T21:02:00-04:00
DyHrdMET
2014 mets|
Comments

Get Your Tickets Here

Last week, the day after the Mets 2015 schedule came out, I got a call from my ticket rep (I have a 10 game flex plan this season, the first time I've had a ticket plan in my name) and he asked if I had looked at the new schedule. I started talking about the potential road trips. I was 2 cities in before I realized he wanted to hear about my thoughts on the home schedule. For the record, I was eyeing Wrigley Field and the trip to Toronto, both in the spring. Maybe that speaks volumes about what it's like to be a Mets fan these days.

I'm not here to complain about the on-field state of the 2014 Mets. That ship has long since sailed. Instead, I'm trying to make up my mind about renewing my ticket plan for the 2015 season. For the few seasons before 2014, I had been going to my fair share of games (almost exclusively on weekends) mostly on an adhoc basis. I would have one game with my dad, there might be one or two groups that I would join, and the rest I'd go to and either meet a friend with an extra ticket or pick one up at the box office. There was never a ticket plan to suit my needs. I liked the freedom (for most of the games) to decide to go or not to go, and on a weekend, to decide to go on Saturday or on Sunday. I liked having a lot of flexibility.

Then new for 2014, the Mets came up with a new idea of a flexible ticket plan. I got a sales call one day over the winter and the rep started telling me about this flexible ticket plan. I could choose whatever games I wanted (minimum of 10) and at each game, whatever seat(s) I wanted. It had to be a consistent number of tickets per game on the plan (getting a second ticket for a game with my dad was basically a separate order, a separate delivery, and a ticket not in season ticket holder stock), but otherwise, I had all kinds of flexibility. I didn't even HAVE to by Opening Day or the Yankees. Committing to 10 games well ahead of time may not make it worth it (what if my plans change), even with the discount on ticket prices and merchandise for being a plan holder, but there was one last detail which had me sold. Up to two times before the game, and up to two times after the game, I could exchange an unused ticket for another game. So if I had a Sunday ticket and wanted to go on Saturday, I could do that...twice if I wanted to. That had me sold. There were a few games I was locked in to no matter how I got tickets, and many other likely candidates for games (since I really only go on weekends and generally not twice on a weekend), and there's only so many home weekends in a 6 month season, so I decided to buy the 10 game plan, and pick my games (this was in February, so kind of close to the season).

I did choose Opening Day and a Yankees game thinking I could sell them and then only have to commit to 8 actual games. I went to Opening Day to see people and had tons of trouble selling a Yankees game. Otherwise, I have been very happy with this plan. My rep and I have talked a few times during the season. I went to Citi Field in February for a tour (I missed a few stops on the tour because of snow and ice on the field, seats, and outdoor concourses). We met up a few other times at the ballpark. I had to miss a game early in the season with a giveaway that I really really wanted, and not only did my flex plan allow me to switch the game for another one, but my rep held the giveaway for me and gave it to me (along with one or two other goodies) at another game. He's tried to give away free tickets, sometimes successful. My rep has been great to me. This plan has been great to me. Despite all of the Mets problems, I want to renew this plan for next season.

In in September, as the 2014 season ends, I get the renewal info for 2015. And my rep followed up with a phone call to tell me about some of the changes in 2015. That never sounds good. Now I didn't get any packet of information in the mail or online for the renewal. Just that I should go to the ticket management website. These were the big changes that he told me about.
After hearing all this, my rep told me that after choosing the required games, I could always use my swaps if I didn't want to go to those games. Sounds fair, right? It's a little different for sure.

So now it's time to think.

I haven't had interest in seeing the Yankees in Queens since 1998. It's hard for me to take the day off for Opening Day (and in 2015, it's just a Home Opener and not a true Opening Day) so soon after returning from my vacation to Spring Training. And I don't have a great interest in it anyway. The Red Sox are a bit of a curiosity to me, but I'd rather see that matchup at Fenway Park than Citi Field. But I know that Red Sox fans travel well. I was wrong about making money on the Yankees in 2014, but I really think the Red Sox could sell out Citi Field for 3 games in 2015. Only having to choose 7 games from outside of the marquee ones appeals to me more than 10 games does. Possibly wasting my limited flex options to get rid of tickets that I don't necessarily want doesn't appeal to me. And for that matter, choosing games more than 6 months before the season even starts doesn't appeal either.

In the end, the discounts will probably be worth it, and I think I can choose 2 Red Sox games to sell high to offset the other costs. Maybe this will work out in the end. But I'm not sold yet. I think there's a strategy that I need for selecting games to try to maximize potential swaps. I know I can always add a game later on at a discount price if things work out better than anticipated.

Leave a comment or drop me a line at DyHrdMET [at] gmail [dot] com. Your comments will fall into a moderation queue.
"Like" RememberingShea on Facebook (the function formerly known as "Becoming a Fan").
Become a Networked Blog
Email ThisBlogThis!Share to TwitterShare to FacebookShare to Pinterest
Posted by DyHrdMET at 3:15 PM
Get Your Tickets Here
2014-09-13T15:15:00-04:00
DyHrdMET
2015 tickets|
Comments

Yes. We Mets fans love Kevin Burkhardt. We think he's the best (or "the bomb" in late '90s slang; or maybe "all that" in mid '60s speak). He's funny (his twitter profile says that he's a "certified goofball"). He's personable. He's great with the fans (see below). And he's great at what he does. He gets great insight from players and reports on it during the game along with interviews and features during pre/mid/post game. 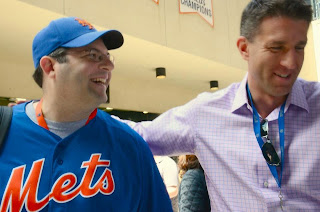 Ya, that's me. With Kevin Burkhardt when he crashed my 35th birthday party at Citi Field. Actually, I think I was at his Celiac Awareness event/game in 2013.
And we're losing him. He's leaving SNY at the end of the Mets season (which is rapidly approaching) for a full-time position at FOX Sports. And he has a very high profile position there too. He was hired last season to call NFL games on FOX and impressed everyone there enough to be given an NFL Playoff game assignment (the network only has 1 such assignment that's not for their top broadcast team), and was promoted up to the number 2 announcer for this season. And after a few appearances filling in to call games for MLB on FOX, "KB" as he's known was hired this season to be not a play-by-play man (like he is for the NFL), not a reporter (like he is for SNY), but the primary host of MLB on FOX, including the All Star Game, MLB Playoffs, and World Series. And we hear that he's going to call College Basketball games on FOX. (It should be noted that some of his FOX Sports duties are on the FOX television network and some are on FOX Sports 1 and maybe FOX Sports 2 on cable).

That's a mighty high profile gig. Or as I see look at it, our little Kevin is all grown up.

So the fans over the last couple months of the season have been showing their love to KB, both on twitter and in person (I know of a couple that on separate occasions, fans sought out Kevin to meet up and get a photo with our beloved broadcaster during a Mets west coast road trip by connecting with him on twitter). And with that, for Kevin's last game at Citi Field in front of the home fans (September 17), there is a happening with fans gathering on the Shea Bridge for the game as a way to say goodbye to Kevin in person (and hoping that he obliges the fans and stops by for a few handshakes, hugs, and autographs).

So for what I jokingly refer to as "Kevin Burkhardt Night", I have assembled a list of fake events that we, the fans, will hold in his honor. It goes with the twitter hashtag #FakeKevinBurkhardtNightEvents.


Leave a comment or drop me a line at DyHrdMET [at] gmail [dot] com. Your comments will fall into a moderation queue.
"Like" RememberingShea on Facebook (the function formerly known as "Becoming a Fan").
Become a Networked Blog
Email ThisBlogThis!Share to TwitterShare to FacebookShare to Pinterest
Posted by DyHrdMET at 7:57 PM
We Love Kevin Burkhardt
2014-09-05T19:57:00-04:00
DyHrdMET
kevin burkhardt|
Comments