Forever the Voice of the Mets

Bob Murphy was born 90 years ago this September. Born in Oklahoma, he got into broadcasting after serving with the Marines during the War. He started out calling games for the Muskogee Reds in his native state as well as for the Tulsa Oilers before getting the call to the big leagues in 1954 when he joined Boston Red Sox radio broadcasts along side the legendary Curt Gowdy. He stayed in Boston for 6 seasons and then moved down to Baltimore for another 2 honing his craft before finding a home with the expansion New York Mets in 1962. He called New York Mets games for their first 42 seasons, retiring after the 2003 season, his 50th in the Major Leagues. He also called Oklahoma Sooners (NCAA) Football in the 1950s and 2 seasons of the AFL's New York Titans as well as radio broadcasts for the Orange Bowl in the 1980s. He might be best remembered for, in 1973, hosting "Bowling for Dollars" in New York. 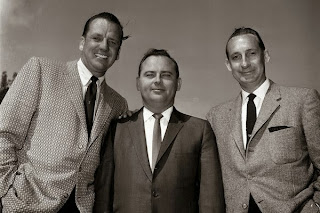 When the Mets were starting up in 1962, they wanted a broadcasting trio that consisted of a network guy (Lindsey Nelson), a former slugger (Ralph Kiner), and a straight up play-by-play man that would rotate between TV and radio. Bob Murphy won the job beating out a couple hundred applicants. The original trio remained in tact through the end of the 1978 season and were inducted together into the Mets Hall of Fame in 1984. The TV/radio rotation remained through the 1981 season. 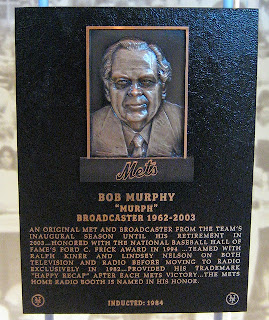 Starting in 1982, Bob Murphy was the lead radio broadcaster for the New York Mets, a position he would hold until his retirement in 2003. Bob Murphy shared a booth with Steve Albert, Bob Goldsholl, Art Shamsky, Steve LaMar, Gary Thorne, and finally starting in 1989, Gary Cohen. The first generation of Mets fans grew up with the Nelson-Kiner-Murphy trio, while a whole other generation (including my own) grew up listening to Bob Murphy calling games on radio where he was cemented as "the voice of the Mets" 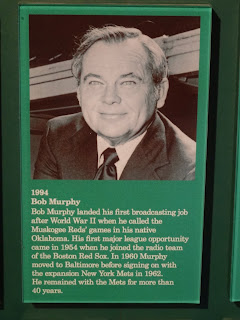 In the summer of 1994, after 40 years in the majors, Bob Murphy was presented with the highest honor among baseball broadcasters when he was awarded with the Ford C. Frick award and inducted into the broadcaster's wing of the Baseball Hall of Fame.

Bob Murphy was known for being a homer, which isn't necessarily a bad thing. After all, he was the voice of the METS and not a network broadcaster. He was upbeat in his broadcasts when the Mets were good, and he showed the despair when the Mets were on the brink. That was evidenced in his description of maybe the most roller coaster inning in Mets history. From being on the brink of elimination to coming back and winning the game, you can tell just by listening to the tone in his voice what was happening.

When I think about the history of the New York Mets (at least until 2003), I hear it in Bob Murphy's voice. I've listened to some interviews where he'd be asked about something and then breaks into a narration of the moment. Someone could probably pull together enough interviews to get a pretty decent narration of the first 40 years of the Mets. He had a different inflection in his voice than most broadcasters and he had a unique way of using adjectives and adverbs. I don't know if it was his Oklahoman accent or his diction or what. Listen for yourself to a few random soundbytes from the 1999 and 2000 seasons:

July 31 marks 20 years since he was inducted into the Baseball Hall of Fame, and August 3 marks 10 years since Bob Murphy passed away. Take a look at the MLB.com tribute page on Bob Murphy after his passing. In my mind, Bob Murphy will be forever the voice of the Mets.

Leave a comment or drop me a line at DyHrdMET [at] gmail [dot] com. Your comments will fall into a moderation queue.
"Like" RememberingShea on Facebook (the function formerly known as "Becoming a Fan").
Become a Networked Blog
Email ThisBlogThis!Share to TwitterShare to FacebookShare to Pinterest
Posted by DyHrdMET at 9:35 PM
2 comments