I'm not bitter. I'm really not. But I didn't win on Banner Day like I had expected to. And I still don't know why.

I am more than ecstatic with how my banner turned out. 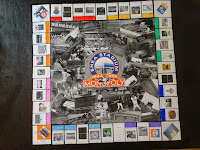 The reaction from family, friends and strangers to my banner was something on a level above anything I've experienced before. I could tell that people were blown away by it. A number of people told me either that I should be a finalist (before the finalists were announced) or that I was robbed (after the finalists were announced). And people took time to take it all in. And therein lies the rub. My feeling is that I had too much for the judges to see in such a short time (15 to 30 seconds). I couldn't be properly judged. Remembering past finalists and winners, you could see it all in a short amount of time, and you were blown away. Here, I don't think that was the case. But I also don't think I would have changed anything in my presentation because, really, this was on a whole different level, once fully absorbed, from almost anything else out there. (I did see one other banner that was on my level - "Captain America Saves the Mets", which looked like a hand-drawn comic strip of David Wright as Captain America. I didn't get to read it all, but maybe that person faced the same problem that I did)

And I thank all of you for your support and kind words through all of this. I knew I had done something special, but hearing it from all of you really made me appreciate it.

And I know I've said this before...I've got a killer idea for the next contest that if I can pull it off, I'm a shoo–in to the finals.

As a full fledged supporter of Banner Day, and one who wants to make sure it doesn't go anywhere (I don't trust the Mets), I fully appreciate everyone of the 100 or so people/groups who came out on Sunday with banners to show off their expression and creativity.

But with that, I think the Mets need to make some changes to Banner Day for next year to encourage more and maybe even better participation. The basic idea is to have more prizes and more contests and more judging than the singular parade that we've had for the past 3 years. So here are some ideas.

Basically, my takeaway is to get more people involved by increasing the chances of rewarding people. And others have said that the holiday weekend isn’t good. I like it on a Saturday before a 4:10 game so that we’re not there absurdly early like we were yesterday. Either late May or early June for that is good. Not too early in the season because it means less time to prepare and my creations take time.
And promote Banner Day on Mets broadcasts and in the park better. Have Channel 11 televise the parade live with commentary. It's a whole lot better than parading in front of 200 people inside the ballpark, some of whom are kept at a distance by the ushers (so I've heard). Channel 11 has their own pregame show for some games, so have their morning crew or that pregame show crew show the parade before handing it off to the SNY-produced game telecast.


Leave a comment or drop me a line at DyHrdMET [at] gmail [dot] com. Your comments will fall into a moderation queue.
"Like" RememberingShea on Facebook (the function formerly known as "Becoming a Fan").
Become a Networked Blog
Email ThisBlogThis!Share to TwitterShare to FacebookShare to Pinterest
Posted by DyHrdMET at 8:49 PM
Banner Day Aftermath - I'm Not Bitter
2014-05-28T20:49:00-04:00
DyHrdMET
banner day|
Comments

So most people have a 3 day weekend for Banner Day, the unofficial start of summer. Wait, that's Memorial Day Weekend. So today is the traditional Banner Day doubleheader with the parade in between games. Close? It's just Banner Day, with the parade of banners starting shortly after the ballpark opens at 11am. And thanks to mother nature and Friday night's rainout, we still get the doubleheader.

And for the 4th time in the 3 years since the return of Banner Day, I am entering the parade and contest (I had 2 banners last year). And I think I have the winner this time. I've thought my ideas were awesome before, but this is my best one yet. 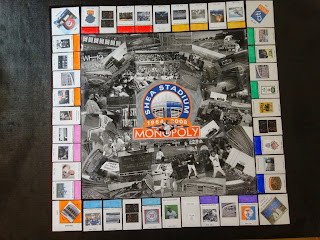 So this is where I go on explaining what I did and why. First, in case you didn't recognize the game board and colors, and the logo in the middle, this year's banner is called "Shea Stadium Monopoly". 2014 is the 50th anniversary of Shea Stadium (an occasion really only celebrated by the Mets for one weekend in April with a price reduction and a giveaway that features a slightly modified version of the "Final Season at Shea Stadium" logo, which I used in the banner), so that was my theme. It's not necessarily about the Mets. It's about Shea Stadium. So let me give you a tour of the game board.
For all 40 spaces, they are hand-cut from poster board nearly to exact measurements. The labels are computer printed onto stickers and cut and placed on the spaces. And the same technique was used for the pictures. The colored areas, where applicable, are hand-colored using either sharpies or markers, based on what I had in stock that came close to matching the colors on the actual game board. The black boarders between the white space and colored space on each game space, when applicable, was hand drawn as well, using measurements as a guide. You can probably tell that it's hand-crafted by some of the labels, pictures, lines and even cuts being a little off. I like that it looks hand-made. Banner Day should have that look. The spaces were all laid out on the posterboard and taped down. The black spaces between each game space, which again look a little uneven, were based on how well I spaced out everything and then how much each piece shifted as I attempted to tape it down. After seeing the contrast between the clear scotch tape and the posterboard, I went in with a sharpie to basically hide as much of the tape as I could.

And then there's the centerpiece, which could be an awesome banner in and of itself. It's a black and white photo collage of pictures from Shea Stadium. It's mostly Mets, but it also includes the Jets, Yankees, concerts and even the Pope. None of the photos here are repeats from the actual game board. I won't even begin to list out what these pictures are. Nothing is completely hidden from view. There's probably a couple dozen in total of different shapes and sizes and orientations (slanted in different directions).

And in the center of it, bringing good color contrast, is the game's logo, which is the Shea Stadium final season logo combined with the Monopoly game logo, including Rich Uncle Pennybags (a.k.a. Mr. Monopoly). I was hoping to use the Shea Stadium 50th anniversary logo, which is the same as the one I used except for the text ("1964 * 2008" replaced by "50th Anniversary"), but I never found that logo in downloadable form. It was used on the Shea 50th Anniversary Canvas print. Anyway, the logo still worked. The Monopoly logo fit in nicely and covered up the Mets logo, which for once is good since this is about Shea and not the Mets.

You may or may not be able to tell from a distance (I hope not), but everything is taped down, gaps in the centerpiece were colored gray in order to blend in, and gaps between the game spaces and around the center of the gameboard were colored black over the tape.

It took me almost 4 weeks of nights and weekends to put together, and the original idea and initial design was dated 12/16/2013, with the idea for the centerpiece coming together just in the past week. It measures about 32 inches square, much larger from the 19 square inch sized gameboard from the manufactured games (in fact, the centerpiece is larger than the 19 square inch size). I wanted something larger so that the pictures on each game space could be seen from a distance, which is what would be necessary during judging and also in the parade.

And I hope you like it. Happy Banner Day.

Leave a comment or drop me a line at DyHrdMET [at] gmail [dot] com. Your comments will fall into a moderation queue.
"Like" RememberingShea on Facebook (the function formerly known as "Becoming a Fan").
Become a Networked Blog
Email ThisBlogThis!Share to TwitterShare to FacebookShare to Pinterest
Posted by DyHrdMET at 11:00 AM
Banner Day 2014
2014-05-25T11:00:00-04:00
DyHrdMET
banner day|shea stadium|
Comments