My first game and my biggest game

Thanks to Greg Prince of Faith and Fear In Flushing for sending this over a while back from his "Flashback Friday" archives. It's a writeup on the first ever game I saw at Shea Stadium, attending as an 8 year old non-fan pulled out of school, and it happened 20 years ago today (September 18, 1986), the day after the Mets clinched the division. I can't say I was hooked on the Mets immediately. That didn't happen until the end of Game 6 and then Game 7 of the World Series. Those are the only three games from the 1986 season/post-season that I even remember watching, even parts of.

I wish I had pictures. I wish I had the scorecard. I wish I had the ticket stub. All I remember was Hojo hit a home run and Rick Anderson pitched. Mets won 5-0. I found out years later that Greg Maddux pitched for the Cubs that day. You'll recognize the game in any highlights because of the green "band-aids" on the outfield grass (that's how my father explained to me what that was, while later Vin Scully called it "Sharks at feeding time"). This wasn't the regular Mets lineup.

Today is also the anniversary of the 2006 Mets clinching the division (many many similarities to the 1986 Mets). I attended that game along with my father to honor the 20th anniversary of my first game. I also knew when I picked the game in August that it would be that year's clincher. I have the ticket stub, program, photos, and video from the 2006 game. 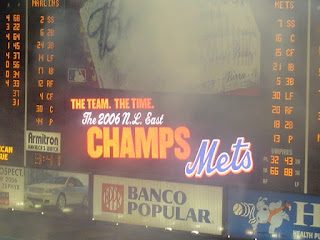 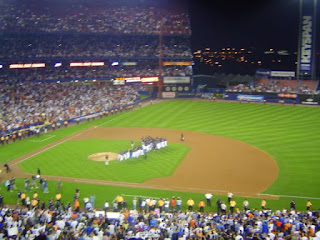 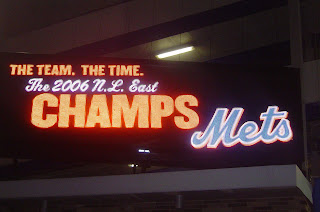 Leave a comment or drop me a line at DyHrdMET [at] gmail [dot] com.
Become a fan of RememberingShea on Facebook.
Become a Networked Blog
Email ThisBlogThis!Share to TwitterShare to FacebookShare to Pinterest
Posted by DyHrdMET at 8:00 AM