Earlier tonight I wrote about the plans for Retired Numbers.

Casey Stengel Plaza - this was a street sign, possibly even a valid street name, on the edge of Shea Stadium near the subway tracks. Let's re-purpose that name for the plaza outside Citi Field where the Shea Home Run Apple is. Basically, keep the new Casey Stengel Plaza as close to where the old one was (if my memory is correct about the location).

Mike Piazza - this is a play on words. In Italian, piazza is an open square especially in an Italian town. Taking a liberty that we're at Citi Field, not in Italy, let's name the area on the Promenade concourse behind home plate the "Mike Piazza". It's not an open square, rather, it's an open circular area.

We could always switch the names of Casey Stengel Plaza and Mike Piazza. It might be fitting that the Home Run Apple is inside Mike Piazza.

Now what to do for Jerry Koosman? And the eventual others? Especially since the Mets probably won't change the name of a sponsored area in favor of a Mets all-time great. Go with the street sign idea. Mets of the 60s and 70s go down the LF side while Mets of the 80s and beyond goes down the RF side, unless otherwise noted.

The Kid Area - again, another play on words. This is the kids area in the back CF corner on the main concourse, and named for Gary Carter (a.k.a. "The Kid" or "Kid").


Leave a comment or drop me a line at DyHrdMET [at] gmail [dot] com. Your comments will fall into a moderation queue.
"Like" RememberingShea on Facebook.
Become a Networked Blog
Email ThisBlogThis!Share to TwitterShare to FacebookShare to Pinterest
Posted by DyHrdMET at 10:48 PM
Complementing Retired Numbers
2019-09-24T22:48:00-04:00
DyHrdMET
casey stengel|citi field|gary carter|gil hodges|jerry koosman|mike piazza|retired numbers|tom seaver|
Comments

Today the Mets announced that Jerry Koosman's #36 will be retired by the Mets some time in 2020. He would be the first person to receive such an honor as a Mets player that isn't a Baseball Hall of Famer (Gil Hodges had his number retired for his accomplishments as Manager, and I won't get into him deserving to be inducted as a player, but not wearing a Mets hat for that).

For me, this opens up a can of worms. Who's next? Where do they draw the line? Several years ago, I made a commentary of sorts on the subject in the form of an entry for Banner Day called "Citi Field Squares", where I had a parody of the old TV game show "Hollywood Squares" where each celebrity square was represented by a Mets would-be or actual retired number. The commentary was that there's a lot more potential retired numbers for the Mets, and I had to limit my game board to 9 squares (and 3 already retired numbers). From that list, 31 for Piazza was eventually retired (6 days after he was inducted into the Baseball Hall of Fame). And I didn't even include 36 for Koosman. 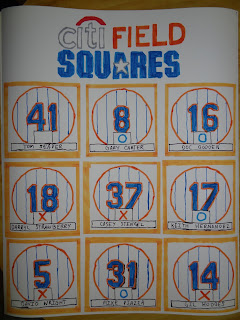 So who's next (after Koosman)? The implication from today's announcement was that there will be others.

Gary Carter is a Hall of Famer, who more or less earned it before coming to the Mets. He earned his World Series ring in Queens. A lot of people are going there. Carter passed away in early 2012. It would have been nice to honor him this way while he was still alive.

Many people want David Wright to be a baseball Hall of Famer. I thought he came up short on that, but he should be the next person inducted into the Mets (team) Hall of Fame. And have #5 taken out of circulation like #24 was taken out of circulation, but not retired. I might wait a couple years before holding David Wright Night and retiring his number just to see if he does make it to Cooperstown.

What about Doc Gooden & Darryl Strawberry (who were inducted together into the Mets Hall of Fame in 2010)? Or Keith Hernandez? Personally, I would have made the next Mets Hall of Fame induction be Gary Cohen this season (now just a few games shy of 31 complete seasons calling Mets games), with Keith Hernandez and Ron Darling following a year or two later (maybe 2021 in their 15th season calling games, or 2022 after 15 seasons were complete) with plaques that indicate for each that their longevity is as a broadcaster while each made a mark as a player. But Keith Hernandez is a borderline Hall of Fame player. So should he get his number retired at some point?

What about Bud Harrelson or Eddie Kranepool? They were both long-tenured Mets from the 1960s and 1970s. Buddy was the only person in a Mets uniform for both World Series championships (as a player in 1969, as a coach in 1986). And Buddy's not in good health. It would be good to honor him while he's still (physically) here. Hopefully the same would be true for "Steady Eddie" should they choose to retire his number.

Who am I missing? Am I wrong about any of these? I don't want to consider (yet, and for a while) the active players.

I always listen to some sound bytes of Bob Murphy opening up WFAN's first Spring Training broadcast in 1998, a recording I made playing around with a Walkman, wires and my computer. Then I listen to a 6 1/2 minute clip of Bob Murphy and Gary Cohen calling another game from that spring. And then there's a clip of them throwing it to a commercial (which now makes me nostalgic for the WFAN Mets Radio Network).

raw audio from Spring Training 1998 (WFAN Radio):
WFAN's first broadcast of the spring with Bob Murphy at the mic


Bob Murphy leading into a commercial

Recently, I found some cassette tapes that I made around the same time as those sound bytes, taken from both TV and radio. So I have some brand new Mets audio clips:

Another game opening on WFAN in Spring Training 1998, with Gary Cohen as the lead and Bob Murphy as the #2 announcer.


WWOR TV's "Fresh From Florida" opening (unfortunately, it's only the audio) with Gary Thorne and Tim McCarver opening "Mets Baseball '98".


A short highlight from Tim McCarver and Gary Thorne on WWOR TV. Pitcher Paul Wilson with a basehit.


Another short highlight from Tim McCarver calling a homerun. I always loved how small and intimate the crowd sounds here.


Leave a comment or drop me a line at DyHrdMET [at] gmail [dot] com. Your comments will fall into a moderation queue.
"Like" RememberingShea on Facebook.
Become a Networked Blog
Email ThisBlogThis!Share to TwitterShare to FacebookShare to Pinterest
Posted by DyHrdMET at 7:41 AM
1 comments