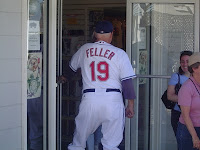 Bob Feller passed away yesterday. He was the senior (living) member of the Baseball Hall of Fame, and in a way, a face of the Cleveland Indians. So that brings me to my "Bob Feller" story. The end of the story is that I also caught a foul ball for the first time since playing in little league that day.

It was Spring Training, and I think it was 2005. The Indians were called Winter Haven, Florida, home at the time (they've since returned to Arizona, but Winter Haven is a whole other story), and I was making the rounds on my second annual Spring Training trip, trying to see all of the ballparks. It happened to work out where I could see the Mets on some long road trips, including against the Indians. But that's not the story.

For many years, Bob Feller was present at Indians Spring Training games (at least home games), in uniform, signing autographs over in the picnic area of the ballpark. So after watching BP and getting my usual pre-game player autograph(s), I decided to get on line to get the autograph of a Hall of Famer.

It's about 20 minutes before first pitch, and Mr. Feller has to stop what he was doing to head onto the field to throw out the ceremonial first pitch, which was a custom at Indians Spring Training home games. And we all kept in line knowing that he would come back.

Somewhat typical of Florida, a freak little rain storm moved over central Florida about 15 minutes before game time. I'm next on line for Mr. Feller, and we all have to scramble for cover. The infield upper-level seating at that park is covered with room to set up a table behind the seating that's still under cover, and that's where the ballpark staff took him, and all of us. Those of us in line even tried to stay in line, while starting to get wet.

They try to set up, and the first few of us in line are also trying to help, including running to the concessions and bathrooms for paper towels to dry off the table for him. We eventually get that settled during what is now a poorly managed rain delay, and I get my autograph. I think it was $5 for an autographed poster with the money going to his museum (which I'll consider a good cause), and I also had a baseball on me for some reason and go that autographed as well (the poster was a present for my father, who I assume had seen him play more than I had).

And I got my autograph. My first Hall of Famer (I've added a couple others since then). The game got rained out. I've tried two other times to see a game in Winter Haven, also against the Mets, and only one time did the weather allow the 9th inning to happen.  I headed off to another game that night in Lakeland (longtime home of the Tigers) and caught a foul ball.  The picture of Mr. Feller was taken before the game in 2006 against the Mets entering the Indians team store.

And that's my Bob Feller story.


Leave a comment or drop me a line at DyHrdMET [at] gmail [dot] com. "Like" RememberingShea on Facebook (the function formerly known as "Becoming a Fan"). Become a Networked Blog
Email ThisBlogThis!Share to TwitterShare to FacebookShare to Pinterest
Posted by DyHrdMET at 8:10 AM
Bob Feller
2010-12-16T08:10:00-05:00
DyHrdMET
bob feller|cleveland indians|hall of famer|spring training|
Comments