Baseball has been asleep for a while, welcome, the game is coming back

Back when I was a bit younger (we'll call it the late '80s and early-mid '90s, a time when I wasn't quite a teenager), I remember running home from school on the day that Spring Training games finally began, or at least the day of the first broadcast on WFAN (for some reason, I had no, or chose not to use, a walkman). I would look forward to hearing the voices that I knew meant baseball for the first time after the long offseason.

On the eve of the fist Spring Training game, I bring you two treats.

First up is a 1 minute audio clip from the Mets first broadcast on WFAN from Spring Training 1998. I won't say any more, other than the voice is forver the voice of the Mets...


Second is about 6 1/2 minutes in length, coming from another 1998 Spring Training game. This one is most of half of an inning from a road game against St. Louis in Jupiter's inaugural season. The play-by-play voice again belongs to Bob Murphy with Gary Cohen along side.


I invite any readers to submit or link to their own Spring Training audio and video from the 1980s and 1990s.


Leave a comment or drop me a line at DyHrdMET [at] gmail [dot] com. "Like" RememberingShea on Facebook (the function formerly known as "Becoming a Fan"). Become a Networked Blog
Email ThisBlogThis!Share to TwitterShare to FacebookShare to Pinterest
Posted by DyHrdMET at 8:17 AM
Baseball has been asleep for a while, welcome, the game is coming back
2014-02-27T08:17:00-05:00
DyHrdMET
audio|bob murphy|gary cohen|spring training|WFAN|
Comments

Mets Announcers at the Olympics

With this Winter Olympics underway, I decided to take a look and see which past and present Mets broadcasters have worked at the Olympics. I found a few more than I had expected. It wouldn't surprise me if there was an omission from this list. If you don't want to do all that reading, head down to the bottom of the post for a few sound bytes from a current Mets announcer calling an Olympic sport.


Here are some sound bytes of Gary Cohen at the 1998 Winter Olympics.


A disclaimer. These broadcasts are probably the copyright of the IOC, USOC, CBS Radio and/or WFAN. I recorded them using an old fashioned walkman plugged into my computer in 1998, live, as the events happened.


Czech goalie Dominik Hasek with 3 great saves against the U.S.


Mikhail Shtalenkov with a save for Russia


Petr Svoboda with a goal for the Czech Republic

Leave a comment or drop me a line at DyHrdMET [at] gmail [dot] com. Your comments will fall into a moderation queue.
"Like" RememberingShea on Facebook (the function formerly known as "Becoming a Fan").
Become a Networked Blog 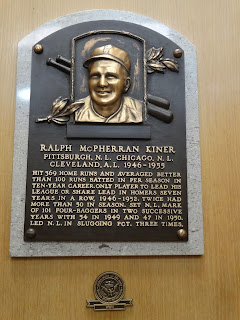 But with the rotation (both during the game and from season to season) of announcers on Mets TV over my first decade as a fan, there was Ralph, a constant, and usually along side eventual Hall of Fame Broadcaster Tim McCarver. Even at a young age, and before I could really appreciate the history, I understood that Ralph Kiner was an original. In a way for me, those are the glory days of Mets broadcasts. A Sunday afternoon watching Channel 9 with Ralph Kiner and Tim McCarver and Kiner's Korner after the game. The team wasn't good for most of that time, but I didn't necessarily care. The broadcasts were entertaining. And that was led by Ralph Kiner.

Kiner's Korner faded away some time in the mid-90s (IMDB.com says 1995). The "glory days" as I knew them faded away too, but Ralph kept going. As I got older and I began to appreciate Mets history, I began to appreciate how original broadcasters Ralph Kiner and Bob Murphy were still there calling games, having been there since that far away time of 1962. A new era (to be fair, probably a 4th new era in Mets history) dawned with Ralph no longer doing play-by-play (he had a bout with Bell's Palsy which affected his speech). But he never left the ball club. How could he? He was Ralph Kiner.

In his later years (the modern era), he only made a few appearances each season. He would come in only for a few innings at a time (something I never understood why it was so short), and it was usually pure gold.

In a few week, we'll reach the start of a new baseball season. Sad to think it will be the first Mets season which won't have Ralph Kiner in the booth.

Leave a comment or drop me a line at DyHrdMET [at] gmail [dot] com. Your comments will fall into a moderation queue.
"Like" RememberingShea on Facebook (the function formerly known as "Becoming a Fan").
Become a Networked Blog
Email ThisBlogThis!Share to TwitterShare to FacebookShare to Pinterest
Posted by DyHrdMET at 8:39 PM
Kiner's Korner
2014-02-06T20:39:00-05:00
DyHrdMET
ralph kiner|
Comments